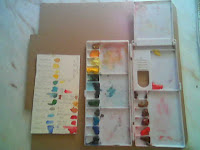 My big project yesterday was to clean my watercolor palette. Doesn't sound like much but it turned into a production. I use a portable, folding, white plastic palette. I don't do too many watercolors but I do enough that I like to have a system set up. I like to keep the same colors together - all the blues, all the reds... Some people tend to keep the warm and cool variations together, but that isn't important to me as long as the same colors are in the same locations and I can find them without thinking too hard.

There is no room on my palette for labeling the colors, so I make up a separate chart, my old one was on card stock, the one I made yesterday was on a scrap of illustration board. Nothing fancy, just drew a layout of how my trays look and after deciding which color went where, I recorded it.

But before I could do that, I had to clean it. It was nearly empty and there was a lot of stray colors here and there so I soaked it for a while, changing the water out at least once. Then I scrubbed it with soap and water til most if not all the paint was gone.

Then I dug out my tubes of paint. Did I mention that I do not use my watercolors often? Some tubes were easy to open and the paint came out nice, maybe half. Some tubes opened and the paint could be forced out with great effort, about a quarter. The others were dried solid or almost so. Those I wound up cutting the bottom of the tube and scraping out the paint and putting it into the palette. One was so dried it was crumbling, so I gathered the chunks and put them in a area, then wet them so they would melt together. To the dryer tubes I also added a little water into the tubes before I closed them up again so maybe they will become more pliable.

Many paper towels, rags, knives, awls and stained hands later, I had my palette filled up. I did change out a few colors from my original layout (which was dated 1991). Seems I had acquired a few new paints since then that I like better than my earlier ones. But most are the same basic colors I always use.

Now I am ready to pull out my palette and brushes and start a new watercolor. I found a few during my studio clean up that I want to finish, so now I have the tools ready to go. Taking care of your tools is an important part of being an artist. It turned into a bigger effort than I had expected, but since it appears I only do this every 17 years or so, I shouldn't complain :)
Posted by Artist Jackie at 7:56 AM