Framing Out The Mural 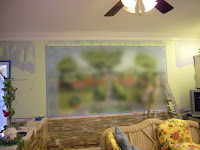 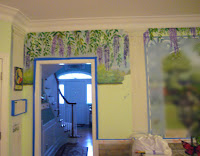 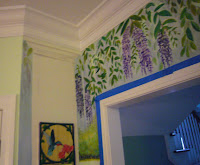 This house has a very nice mural on their family room wall. But painting around it caused a problem when they wanted to re-do the rest of the walls. So I have been commissioned to paint a mural around the mural.

The plan is to frame out the trellis with 2 columns. Add a 3 column on the far wall. Add wisteria vines along the ceiling. Extend the trees and lawn areas to the rest of the wall. Add flowering vines on the columns. Have all of the colors coordinate with, if not match, the existing mural. Plus try to emulate the style enough that both pieces work together.

Then I painted the wisteria and vines. They may still need a few shadows and highlights but I will judge that after the rest of the mural is done. It will look different as it goes.

Next was the lawns and extending the bushes and flowers from the existing mural.

Later I will work on the columns.
Posted by Artist Jackie at 10:59 AM