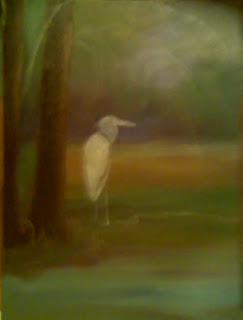 The next stage in creating the painting of the Sand Crane is to plan it out. The background is dry, so I transferred the outline of the crane and placed it where I wanted it in the landscape. I feel where I placed it, it echos the trees. I also placed it facing to the right. That way it is looking out of the canvas, rather than sticking its nose into the tree.
I used some titanium white and 'whited' it out. This way I have a clean slate to paint on and the colors I use for the bird will remain true and have less of a chance of appearing muddy.
I used white chalk to sketch out the branches, the Spanish moss and the shore line of the pond. Planning is just as important as putting paint on the canvas. It is easier to erase chalk than repaint an area.
Don't remember who said it first but "Failing to plan is planning to fail.' and that holds true when creating a painting as well as most other areas of life.
Posted by Artist Jackie at 3:48 PM